A Meandering Prologue to a Book Review

My friend Shaun Haurin emailed me a few weeks ago and asked if I wanted to go to Rosemont College on a Wednesday night to hear Elise Juska read from her forthcoming novel. This, it turned out, was a trick question, as my response (“yes,” in case you’re wondering) led not to the outing in question but to a bar on Philadelphia’s South Street where Liz Moore was scheduled to read. Not that this turn of events surprised me. Indeed, I distinctly remember thinking, “This turn of events does not surprise me, as outings with Shaun never go quite as planned.”

(My inner voice can be unnervingly formal at times.)

The bar was called Tattooed Mom, and we were barely through the front door when the bouncer told us to go upstairs and to proceed to the back room. Apparently the back room was where they held their Liz Moore readings. It was also where they stored their graffiti-covered couches and their abandoned bumper cars. And though I’d never been there before, I was immediately recognized by Christian TeBordo and Sarah Rose Etter, authors of The Awful Possibilities and Tongue Party respectively, who called my name in unison, thus allowing me to realize my lifelong fantasy of knowing what Norm from Cheers would have felt like if Cheers had been shot on the set of The Texas Chainsaw Massacre 2.

Meanwhile, several other events were beginning to unfold as well, and not necessarily in the following order:

I ordered a beer because it had a funny name. Shaun ordered the same beer because I had ordered it and was under the impression that I ordered it because I was familiar with it, which I was not. I drank my beer quickly while Shaun drank his slowly. This led to a situation in which I continued to drink while Shaun did not. There’s an excellent possibility that Shaun’s inner dialogue at this point said something like, “This turn of events does not surprise me, as outings with Marc usually end up with Marc drinking a lot of beer, especially when I’m paying.”

(Did I mention that Shaun was paying?)

Several women from my past separately entered the bar. Here, I’m using the term “women from my past” as broadly as possible to heighten the dramatic effect, but, technically speaking, they were A) all women and B) women I had encountered at some point in the past in one way or another. The first of these women was Liz Moore, whom I met last Spring when we both read at Musehouse for Doug Gordon’s All But True fiction series. The second was Mary Rosenberger, with whom I worked at Villanova University’s Writing Center somewhere in the neighborhood of fifteen years ago. The third—and here’s where we’ll start to move incrementally closer to my review—was Marie-Helene Bertino, whose short story “The Idea of Marcel” I had read in a recent edition of The Common and which I had covered in my American Literature II course alongside “Editha” by William Dean Howells.

But here’s the problem: Though I enjoyed “The Idea of Marcel” very much, I had, in the intervening weeks, forgotten the name of the author, so when Sarah Rose—who, along with Christian, hosts the TireFire reading series at Tattooed Mom—introduced Marie-Helene as one of the evening’s readers, I didn’t make the connection. I will, however, foreshadow the tenor of my review by saying that this is not a mistake I will ever make again. Not only was Marie-Helene’s reading of a short story titled “Take Me Home, Sisters of Saint Joseph” both funny and moving, but her collection Safe as Houses is also an excellent read.

But more on that later.

The evening’s readings began with Marcus Pactor reading from his collection of short stories, Vs. Death Noises. Marcus had come all the way from Florida, and as he read, some of his cadences reminded me of the way Mitch Hedberg used to deliver jokes. I made a point of telling him this later in the evening, but the compliment fell flat since Marcus had never heard Mitch Hedberg tell jokes. But he said he’d have to look up Mitch Hedberg sometime to see what I meant, at which point I realized that maybe it wasn’t Mitch Hedberg I was thinking of at all, and that when he looked up Mitch Hedberg he’d think I was crazy. I’ll be interviewing Marcus on my blog sometime in the near future, and I’m hoping the subject of Mitch Hedberg doesn’t come up.

Next up was Marie-Helene Bertino, whose story was funny and sad and charming all at once. It was about a woman who takes a job at a convent in order to get over her breakup with a steakhouse rodeo clown. Coincidentally, I’m familiar with the Sisters of Saint Joseph, as they taught at the school I attended from fifth through eighth grade; they’re very likely responsible for my strong grammar skills. Also coincidentally, Marie-Helene mentioned in her opening remarks that she is originally from Northeast Philadelphia. As am I. As is Shaun Haurin. Who’d have guessed that Northeast Philadelphia was such a bastion of literary aspirations?

To top things off, Liz Moore read from a new short story titled “Shy Shy,” which will be appearing in an upcoming edition of Tin House. Having once sat through a two-hour reading by an award-winning author, Liz set a timer for eight minutes and promised not to keep anyone in the audience any longer than that. Not that we’d have minded, of course, since her story had all the heart of her novels Heft and The Words of Every Song. True to her word, however, Liz stopped reading just shy of eight minutes and, in true show-biz fashion, left us all wanting more.

That’s when the crowd started breaking up and I spotted Mary Rosenberger.

I then remembered that I hadn’t seen Mary in fifteen years and also that any time I run into anyone from that time in my life, they usually look at me through squinted eyes, try to place my face, and then give up. I also remembered that I was seated on a sofa that was covered in graffiti in a room littered with bumper cars—and that these were the most pleasing aspects of the room.

But Mary was a paragon of good grace. Not only did she remember my name, but when she asked the potentially awkward question of how I remembered her well enough to pick her out of a crowded room, she immediately answered the question for me by suggesting that I probably don’t know very many women who are six feet tall.

I went with that answer largely because I didn’t want to make myself out to be any creepier than I already probably appeared by saying that I remembered her because every time I go to the grocery store and see a carton of milk from Rosenberger’s dairy, I think to myself, “I used to know someone named Rosenberger!” Nor did I mention that I still remember her middle name because it’s the last name of one of my favorite comedians (not Mitch Hedberg). And I definitely didn’t mention that I once saw her outside of a trendy Mexican restaurant but didn’t say hello because she was outside and I was inside and that even I was aware that getting up from my seat to say hello to someone I barely knew would have seemed a little odd even if it didn’t completely constitute grounds for requesting a restraining order.

Being the self-conscious creep that I am, I let all of these details slide as Mary said that she was here because she went to college with Marie-Helene. Which, in an odd way, meant that I went to college with Marie-Helene. Or at least that I was in graduate school at the same time Marie-Helene was in college. In any case, I had a nice chat with Mary and a nice chat with Marie-Helen as well, forgetting all the while that I had taught her wonderful short story in my American Literature course, and the next morning, purely by coincidence, I received an email from her publisher asking if I’d like to review a copy of her short-story collection, Safe as Houses.

Needless to say, my answer was yes.

I mention all of this by way of an introduction to my review of Safe as Houses, which is now up at Small Press Reviews. 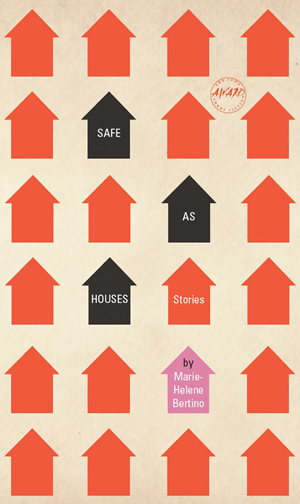 6 thoughts on “A Meandering Prologue to a Book Review”